A hood is a must for this outfit.

I started out with a muslin based on one of the Herjolfsnes hoods.  These finds from 14th century Greenland are amazing in that they are very intact and we have several examples all from the same spot, although they of course are very remote in both space and class from my imagined late 14th-century French noble.  Still, one must start with something, and there are only so many shapes for a hood.

With the assistance of some friends who are experts at clothing, I draped the hood and made some adjustments to get it to fit me better.  The overall plan is just one flat piece folded over the crown of the head, and a triangular gore in the center front. 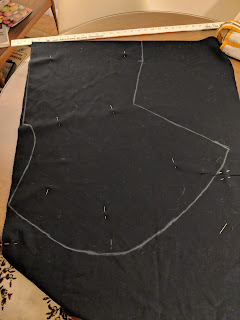 There's also a liripipe attaching to the back.  It's important to have a pretty long liripipe to be able to make the fancier hood-as-hat styles work.  And to annoy your parents by wearing your hood wrong.  I have trouble imagining these fashions starting out as anything other than a teenage trend to annoy your collective fathers.

I'm interested in dressing the hood up by cutting dagging into it.  Dags are small flappy bits cut on the edges of fabric in this period.  Most fabric doesn't do this well because it'll fray, but this fabric is so felty that it doesn't have that problem.

The question, then, is what kind of dags to cut?

http://www.larsdatter.com/dagging.htm has collected a pretty long list of references for dags, so let's take a look.  As a byproduct, we learn some things about liripipe length. 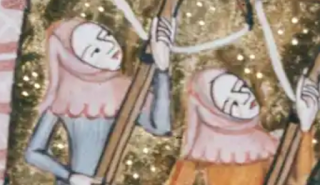 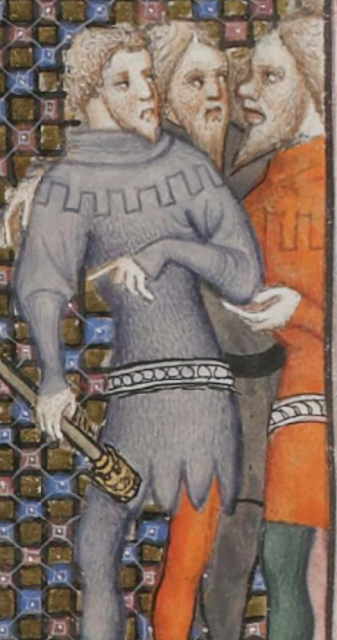 These crenelated dags are perhaps 2-3 inches wide, and 3-4 inches deep.  The contrast with with the shield shaped dages on the baggy cotehardie is also interesting.

The main book here is Chroniques de France ou de St Denis which is after 1380, but much of the fashion to me looks much after: I would call many of the garments houppelandes, and the collars seem like 15th century to me.  Still, there are many hoods with dagging. 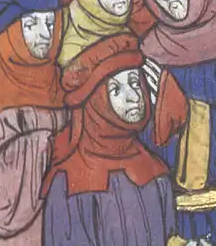 We'll see these very chunky crenelated dags more in this manuscript.This guy seems to be wearing a hood-as-a-hat over the hood-as-a-hood as well.  It might just be a bag hat, with the trailing piece being the liripipe of the hood-as-a-hood. 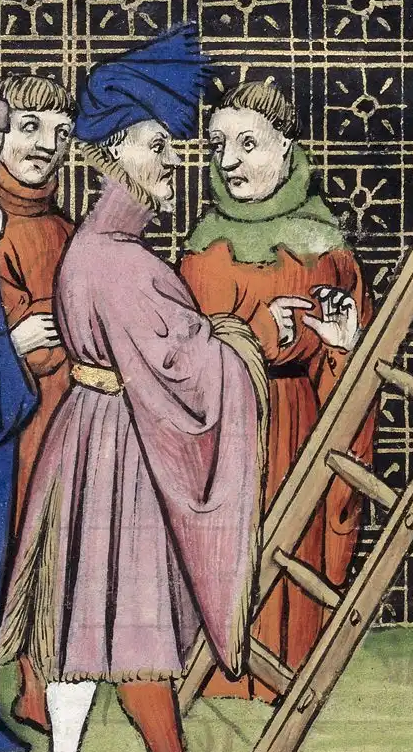 Dags are visible on the mantle edge of this hood-as-a-hat but they are not distinct.  They could be simple slit dags, or are perhaps rounded or pointed.  Note that this man is wearing a houpellande, showing the shift in fashion. 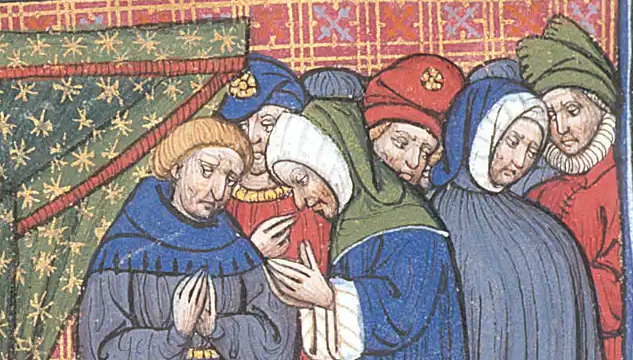 More probably-slit-dags in a few contexts, and some ovoid dags on the face hole of the hood on the left. 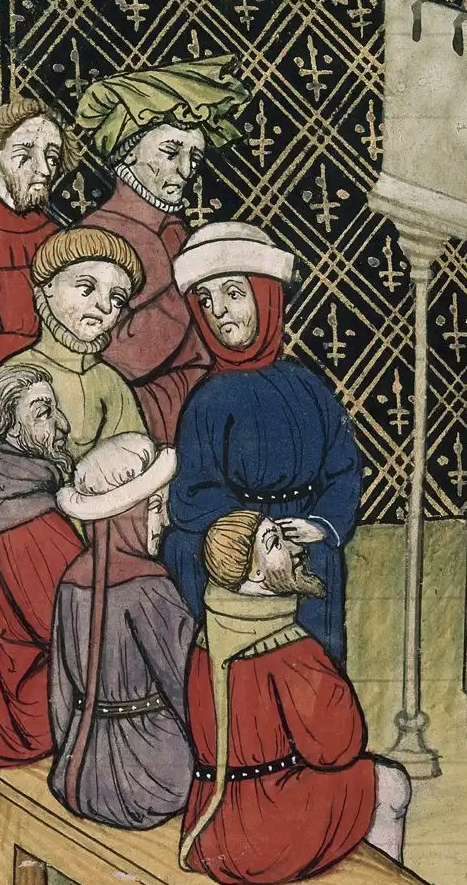 Another set of indistinct dags on two hoods-as-hats.

There are several hoods on this page with slit dags, but OH MY GOD THAT LIRIPIPE SIR YOU NEED TO SEE A PHYSICIAN. 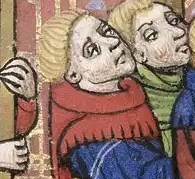 A series of interesting images comes from the BNF NAL 1673 edition (from Pavia or Milan) of Tacuinum Sanitatis: 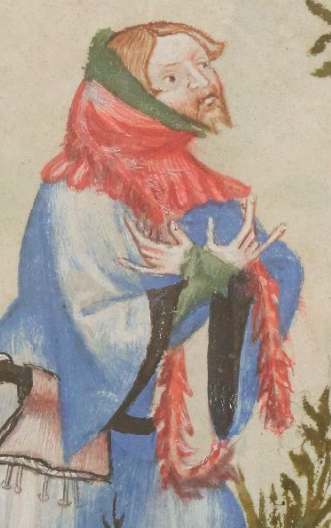 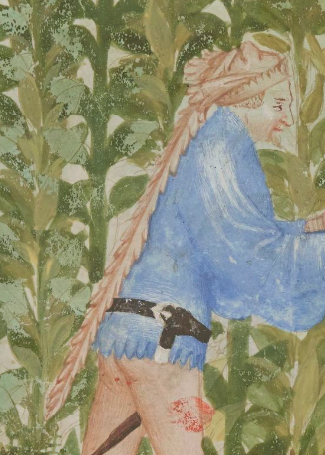 Similar to the above, we can see that this hood's face hole is also dagged.  The mantle dags are somewhat shorter and narrower. 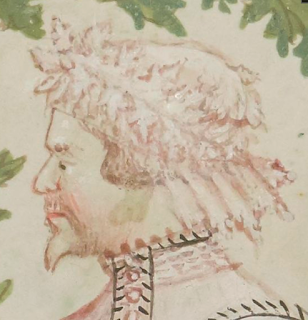 This hood has an intricate leaf dagging pattern on the mantle, and on the liripipe.  To my eye, they do not appear to be the same pattern. 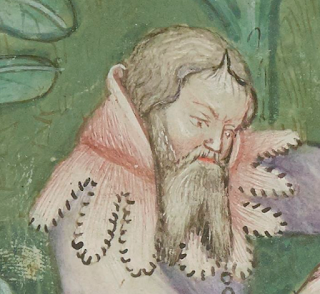 Another interpretation is that the dark green lines is heavy blanket stitching on the dagged edges, which is a popular fashion in the SCA.  I'm not sure, but my guess is the dags-on-dags. 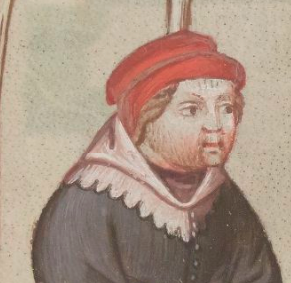 Small (1.5"?) semicirular dags on this hood.  Interesting also that the mantle seems to meet at an angle in front. 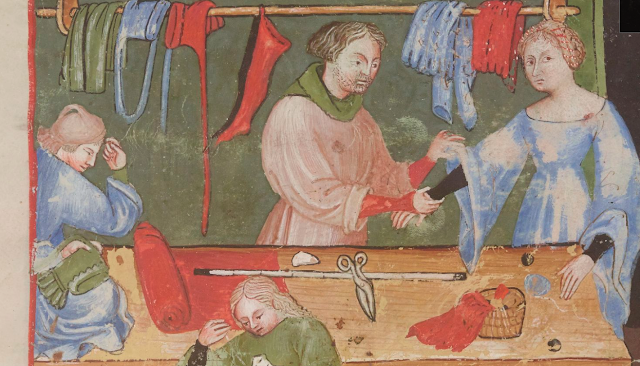 This image is really interesting because we see clothing being sold, not just worn.  There's a hood in the lower left with dags way up at the neck, and a few hanging hoods with long liripipes but indistinct dags.

Conclusions on Dags and Liripipes

I think that we've seen such a range of liripipes that any size and length is supportable.

Dags have a wide variety of forms, but not an infinite variety, and it's interesting that we don't see many leaf dags in these depictions, although there are a few.  I really like the leaf dags on Prince William of Hatfield's effigy, but since that effigy seems to have been made around 1340 (although maybe not?  Larsdatter says 1380... but I have trouble imagining making a tomb effigy for a 6 month old baby 40 years after his death, even a royal one).

In the interest of my time, I decided to avoid the more complicated floral forms, especially since we see even people in fairly fancy cloths in dags that are not complicated.

Great!  So let's cut out these dags.  I played around with some samples and decided on a 2.5" wide by 3" tall dag 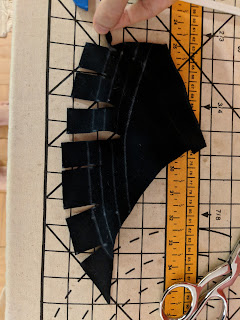 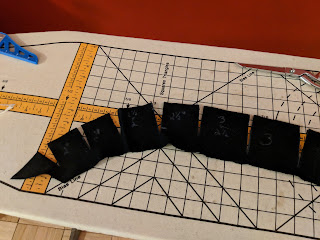 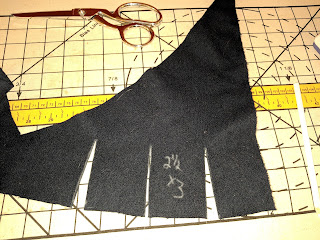 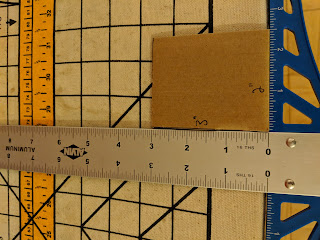 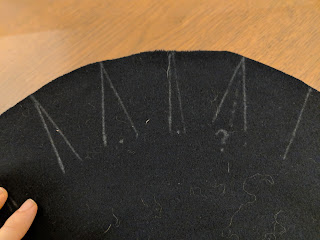 Hmm.  That's a problem.  The hood is flat when wearing it, but is actually three curved pieces of fabric.  So if you try to line up the dags around a curve, they overlap.

I was pretty stuck here, so I reached out to my cadre of medieval friends for help.

There's no way to cut rectangular dags into a curve that doesn't either produce overlapping cuts like the above image shows, or remove material from the curve.  But since the curved sections fall on the shoulders, if we make the dags follow a line 3" inside the curve, we'll have our rectangular dags, but sometimes have little triangles removed from the fabric.  This works pretty well, it turns out! 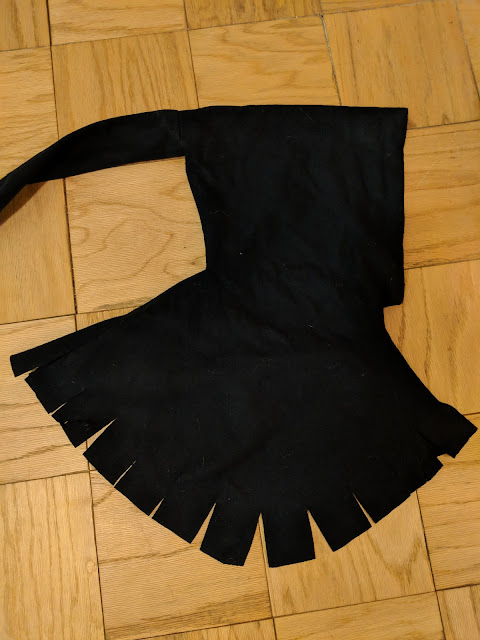 I've left the underside slightly folded back to highlight the dags.  The fabric is flat on the visible layer.

The liripipe is a bit comically long... but actually works nicely.  It almost reaches the floor.

I'm really happy with how the hood came out, and how it dresses up into fancy fashions.  One neat trick I figured out is that you can fold the face-hole fabric up over the liripipe after it is wrapped around your head, which both tightens the whole apparatus, and hides any messy wrapping work.