My various friends' fears of running around Pennsic naked and exposed got to me and I started thinking about making new pants.  Not because I don't have pants.  Not because one even really needs pants at Pennsic, with long tunics (1) doing just fine.

But because it is the thing to do.

I wound up making a pair of pants in less than a yard of 54" fabric.  Efficiency!

I at first wanted to tackle the Thorsbjerg trousers.  These are a fitted pair from the 3rd century CE, but the way the seat is constructed matches scraps found as late as the 11th century in Viking contexts.  I'd managed to track down the original patterns from Ancient Danish textiles from bogs and burials: a comparative study of costume and Iron Age textiles by Margrethe Hald, which other books assure me has the most accurate pattern around (2).

The pattern is exactly the one displayed on this site, and so I thought I'd have a go at their pattern drafting instructions.  They didn't math, which is the topic for another blog post.  I was frustrated, and in my frustration, my mother sent me an interesting article about four linen trousers with very similar constructions, all from around 600 CE.

Simultaneously, I was chatting with a friend about their early-period linen pants, which are sort of comical because they're weirdly dependent on a single panel of fabric.  So are these!  Just in a different way.  It's like early pants started out as a conversation like this:


Hey!  Wrap this on your legs and you will be warm!

Ok but now it's kind of hard to move

Uh, sew up the sides?

Well my junk is still cold

Ah, I can fix that too digs through fabric scraps let's put this on your butt!

I decided to take the simplest pattern and give it a go.  Some math and perhaps 16 hours of sewing later...

They fit pretty well!  And came together pretty fast for my slow sewing speed.  I'm really happy: these are the first thing that I've sewn from a paper to a finished product, really ever.

The four pants in the paper are all constructed the same way:
I decided to whip up a test fit out of some lovely fine linen I had an opportunity to buy a few yards of.  Doing some basic math about requirements:

This gives a leg front panel of 34" (twice the knee) by 38", but the back panel needs to be long enough to wrap around to the crotch.

Curiously, my fabric was 54" wide.  If I put the pants sideways to catch the selvedge (as the original pants did - although they got both selvedges because they were woven to spec), that leaves 54-38 = 16 inches, which is reminiscent of the needed width of 43 - 34 = 9".  If I add two inches to the length for fitting allowance, the back panel goes down to 14" wide, which is plausible.  Plus, roomy pants aren't the end of the world, and linen is not stretchy. (3)

This linen tore nicely, so I tore off the front panel, leaving me a 14" wide strip.  Cutting up to the crotch, and then basting the butt panel in, I figured I wanted about a 21" long butt panel. 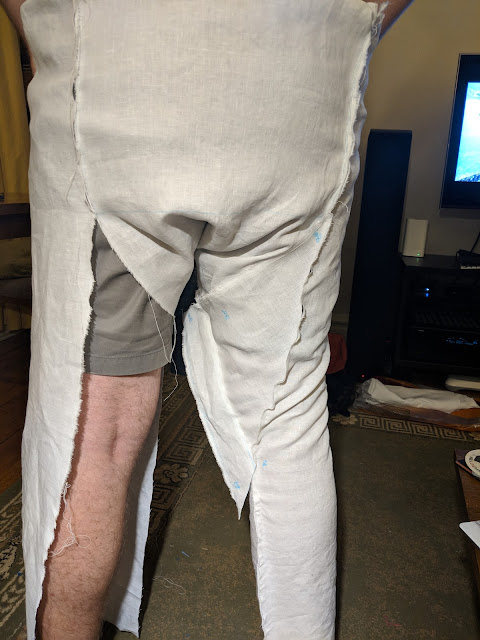 (The gusset was larger than needed, but in the final product I just use the whole thing to avoid waste with better mathing to get the thing fit in properly)

I took apart the panels and reassembled them with run-and-fell stitching.  Here's the progress pics:

The layout.  You don't need any of the measured markings besides the cut lines, unless you're likely to forget which edge of the gussets are which like I do.  Everything else follows from the size of the pieces.

I have the letters here so I can talk about the steps, though.
Because all the seams are run-and-fell, it will make your life easier to set the seams up so that one seam allowance is longer than the other.  The overlapping order of the fells around the gusset is left as an exercise to the reader.

2. Sew the long edge of each gusset to the butt panel from d to e and d' to e', taking care that the right angle (d) points towards the crotch.

3. By aligning the top of the butt panel to the top of the front panel, you can tell how long of a section you need to sew to attach the two and still fit the point of the gusset, a-e and b-e'.  On me, it was 7".  Sew this up and you have a pair of loose chaps with some interesting flappy bits on the back. 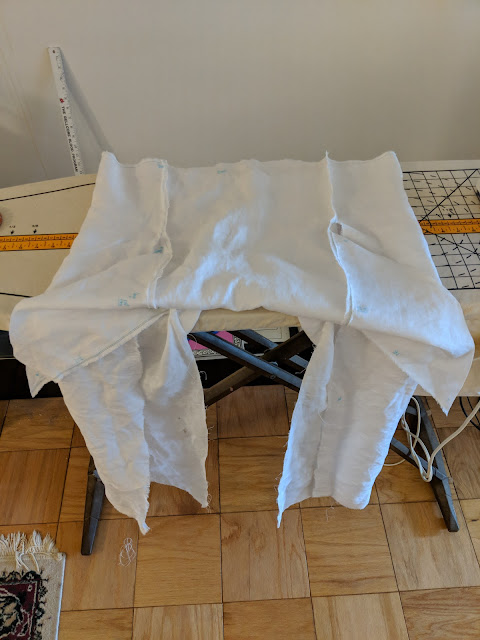 4. Sew the hypotenuse of the gusset to the front panel, from e to f. 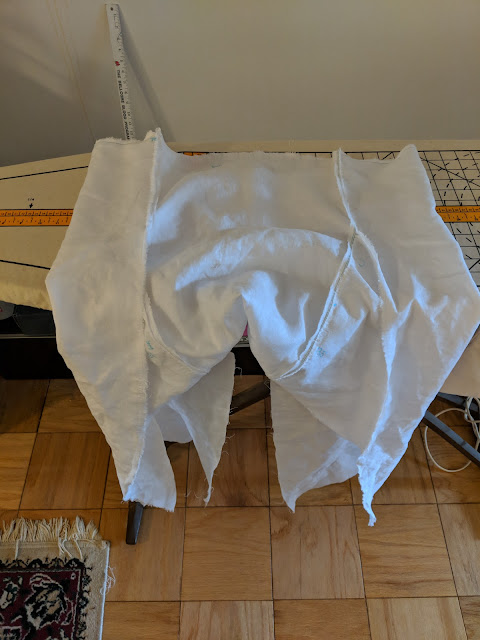 5. Before proceeding, verify that both sides of the lower pant seam will meet within a few inches of each other if you sew up the hypotenuse of the gusset.  Some skew is unavoidable (see misalignment of the two f points in the diagram), but if they're off by more than a few inches, you probably put in the gussets upside down.  Ask me how I know!  You could adjust the crotch depth to get these to align exactly if you wanted to, but hemming exists.

6. Fell the hypotenuse of the gusset.

7. Sew the remaining, short edge of the gusset to the front panel, from d to f and d' to f'.  Check the fit. 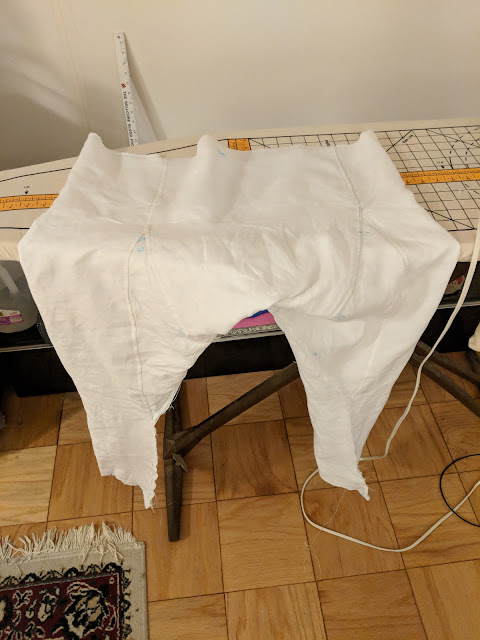 8. Sew the lower pant legs together as far as you want to.

9. Fell the rest of the seams.  Leaving c-d-f-cuff for last worked nicely for me.

10. Consider the top of the pants and how you want to finish them.  I didn't want to deal with belt loops, so I did a fine rolled hem to add stiffness and some strength, then folded that over once to form a 1/4" tube, made some whipcord out of linen tablet weaving warp I had lying around, and threaded that through as a drawstring.  Alllmost too short but it'll do.

11. Finish the lower legs however you want, hemming them to the right length.  I'm probably going to do a rolled hem on the slit and either add ties, or just use straps to keep them shut.  If I wear these under leg wraps they don't even need that. 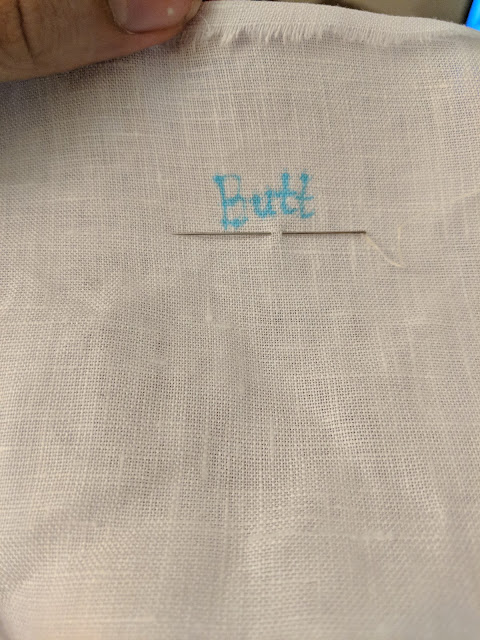 Footnotes
1 with underwear, please
2 the pants are mounted in a way that prevents reexamination of the details.
3 the astute reader will note that this means I added seam allowances vertically but not to the direction that goes around the legs.  I wound up sewing very small seam allowances and they're tight on my calves, but skinny jeans are in, so whatever.
4 I didn't do this when I was reassembling, and had to take it out.  After felling!  Ugh.